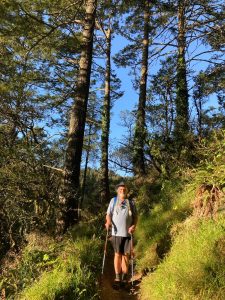 The plan was to hike the Dipsea trail, a delightful 7+ mile walk from Mill Valley, California to Stinson beach. Wikipedia says:

The Dipsea is well known for its scenic course and challenging trails.[32] The race starts on Throckmorton Avenue in Mill Valley, near Miller Avenue, in front of the old train depot (now a bookstore). After traversing a few blocks in Mill Valley’s downtown, runners climb 688 stairs[33] (now 700 stairs, after the renovation of the middle section in Nov 2017) leading up the side of Mount Tamalpais, and then pass through Muir Woods National Monument, Mount Tamalpais State Park, and the Golden Gate National Recreation Area.

The weather was perfect: cool and sunny with a light breeze.  Though it can get downright crowded on weekends, the trail was practically deserted on this winter Thursday and, now that I’m retired, we could do the walk on a weekday. We parked near the trailhead in Mill Valley in the early afternoon and took off with a few light snacks with plans to take the bus back from the beach and get home in time for dinner. 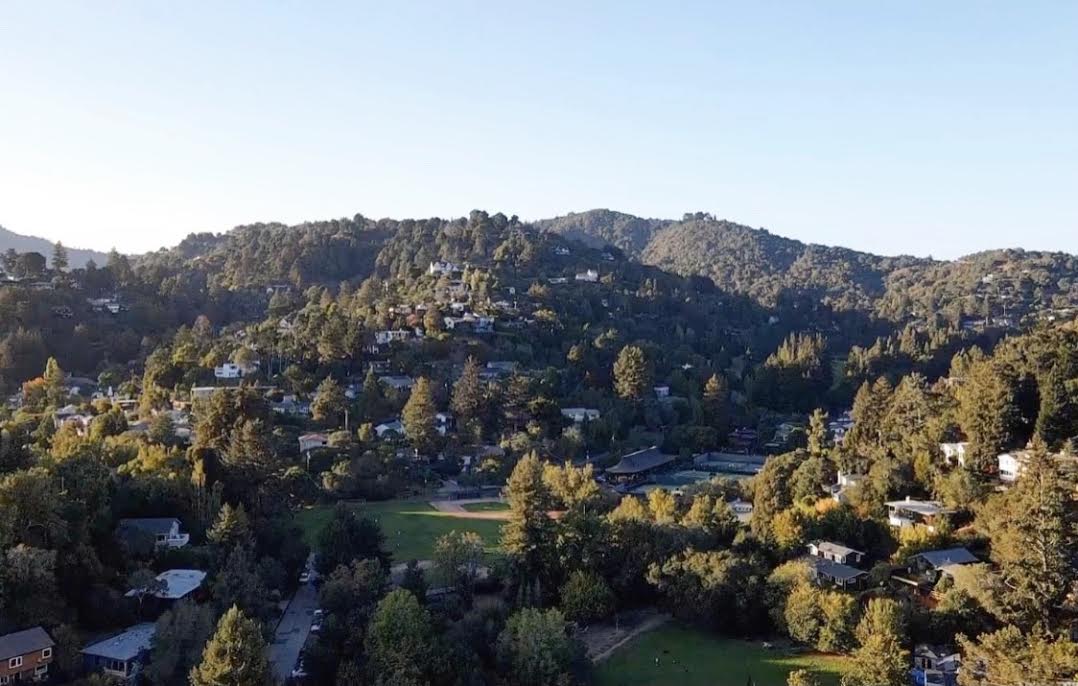 This was the first serious hike I had attempted since developing a painful muscular condition last November, probably polymyalgia rheumatica, though the diagnosis is not definitive. My symptoms have been quite well controlled with twice-daily doses of turmeric, or they just coincidentally resolved. I haven’t had the guts to try skipping the turmeric for a week to see if the disabling pain returns. In any case, I was a little bit apprehensive, but motion seems to make the condition better, not worse, so off we went. I’ve been over the whole trail before, but this would be my first time hiking it all in one go.

The 700 steps went fine. I’m slower than my partner, but she graciously stopped periodically to let me catch up. 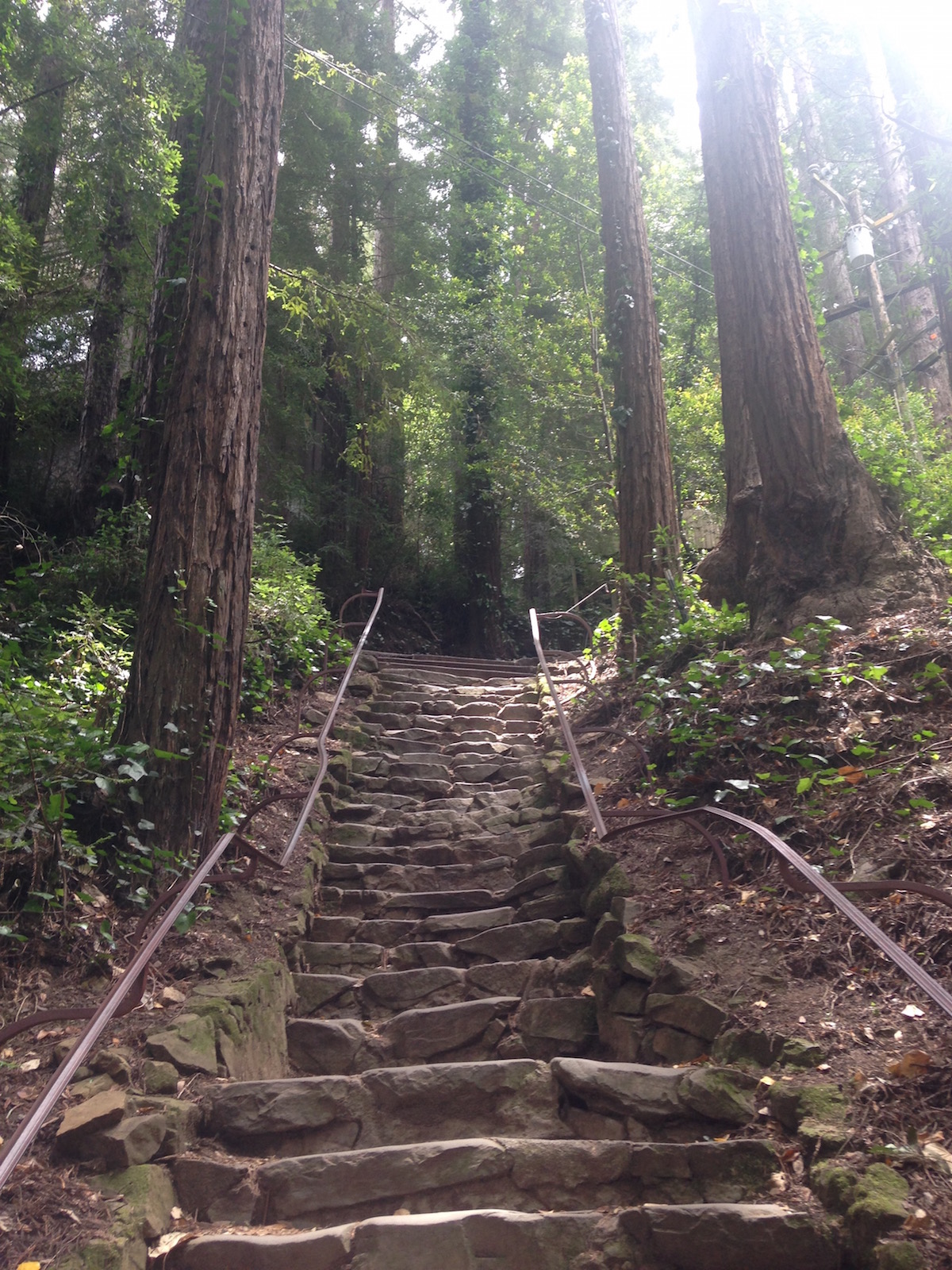 After enjoying the vistas from the inland side of Mount Tamalpais, we descended into the Muir Woods National Monument where we encountered our first bit of the unexpected. A portion of the Dipsea trail was closed to protect the coho salmon run. That necessitated a detour through the Muir Woods National Monument. That’s hardly a hardship; it is a beautiful walk but we were delayed by having to purchase a pass to enter (I had foolishly left my lifetime pass at home), and the beauty and peacefulness recommend a quieter and slower pace. Oh, and we made a wrong turn coming out of the valley and had to backtrack a bit. We were already a bit behind our expected pace, as I discovered that going downhill exacerbated my muscle and foot pain, so we had to go even more slowly. I suppose we could have made up some time, but it’s hard to rush when surrounded by so much serene beauty.

I had to slow again for the last descent to the beach, when my partner noticed a transit bus heading up the mountainside on a distant road. “That’s probably the last shuttle of the day,” she said. Yup. Probably was.

We reached the end of the trail, but had no cellular service. I knew that I could get service at the beach, so we walked down to the sand. I tried to get a rideshare from Lyft, but after about ten minutes of trying the app said that no drivers were available, and to try again later. We watched the sun set over the ocean. I tried again—still no drivers. I tried Uber. Same story. No ride, just less charge on my phone. 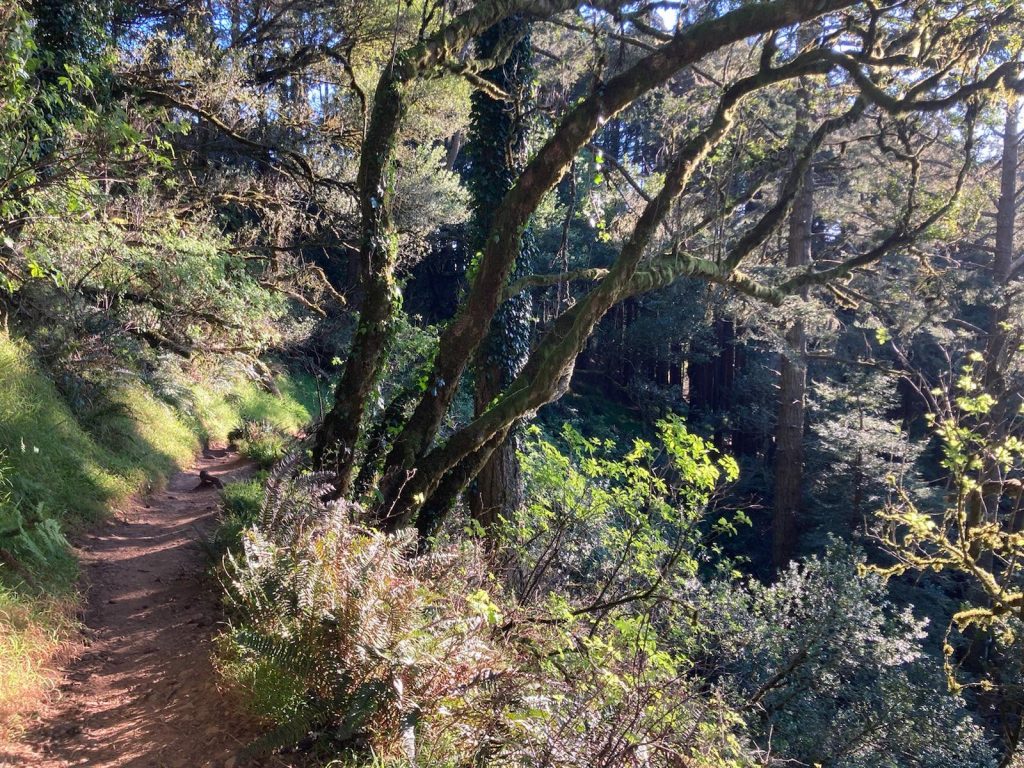 There had been a sign on a bed and breakfast inn as we walked into town, proclaiming vacancy and $99 rooms. We walked to the door and rang the two doorbells, knocked, and hollered but got no response. There was a phone number, but that would mean walking back to the beach for cell signal.

As yet undaunted, we walked to an outdoor restaurant on the main drag and got a couple of unremarkable salmon tacos ($24!) and access to WiFi—only to discover that they were in arrears on their internet bill so the WiFi was non-functional. We asked the barman if we could use the phone, but he warned us off calling the B&B; apparently he’d had some bad interactions with the proprietor. Instead, he suggested a hotel on the beach.

Increasingly aware of the dwindling charge on our phone batteries, we walked (ouch, ouch, ouch) to the hotel. It was dark by then, and getting cold given that we were both bare-legged and not carrying warmer clothing. The hotel office was closed, with a sign saying to call (still no cell service) or use the pay phone (the what?) at the bottom of the stairs. We had no change, and it’s decades since I carried a phone card with me (remember those?) but I thought I’d try calling the operator and see if they would place a call using a credit card. Except… the pay phone was dead.

We walked back to the restaurant and asked to borrow the phone. It took several tries until I ignored the barman’s advice about how to dial the phone and followed my partner’s suggestion. The phone was answered with a “hello,” not reassuring, but the gentleman assured me that he was the proprietor of the hotel. He could “come down” and show me the only space he had available: a cottage for $370 for the night. Too rich for us. I declined.

As we started down the street, my partner exclaimed “is that a bus?!” Indeed, there was a short bus stopped at the corner getting ready to head out of town in the wrong direction. I probably wouldn’t have bothered, figuring it for a private bus or Paratransit or the like, but she jogged over to it (I was barely limping at that point) and the driver opened the door for her. I missed the conversation while limping toward the vehicle, but the gist of it was the the bus was going to Bolenas, the last remaining stop and another seven miles farther from civilization. Apparently, though, there was a bar in town, Smiley’s Saloon, which “has some rooms above it.” We seemed to have exhausted our options in Stinson Beach, so we decided to check it out. 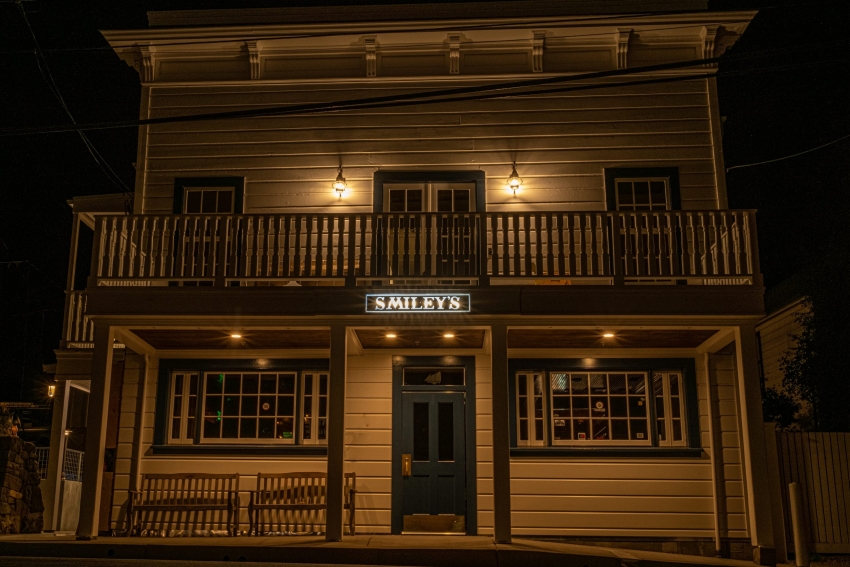 The driver and a passenger knew Smiley’s, but didn’t know much about the rooms. I wondered if we’d have to pay an additional 50¢ to get a hot bath in a copper tub, or if one of the hoop-skirted bar girls would be included in the price of the room. Should we try to acquire some flea spray first? Oh, well. We were low on options, and it was far too cold to make a night on the beach a welcome alternative.

About half an hour later we arrived in Bolenas, were wished well by the friendly and helpful bus driver, and the passenger (a Bolenas resident) offered to show us around. The bar at Smiley’s was quaint and clean, crowded and noisy with a throng of apparent locals cheering a televised ball game. I went off prowling the grounds to see if the hotel area had a separate office, while my partner engaged the barkeep.

I found a pleasant-looking cluster of rooms above and behind the hotel, but my sweetheart learned that, yes, they have rooms available and could accommodate us. They weren’t dirt cheap, which was actually reassuring, and we completed the requisite paperwork and handed over our credit card in the din of the crowded bar.

The room was great. It was primitive only in that it lacked heat, but there was a hot shower and beds with warm, clean bedding. It was nicely decorated and spacious. There was coffee and some light snacks. No television (a plus in my world). And it beat the hell out of illegally camping on the beach in shorts without even a towel to our names. In March. We slept well.

We awoke refreshed and took an early morning walk. Bolenas is a delightful little artist community and we arrived at the beach in time to see the sun rise over the surf (where else in California can you see that?) with the city of San Francisco in the background.

After awesome oat-milk lattes, we caught the Marin Transit bus back to Mill Valley. The vistas ascending Mt. Tam alone are well worth the $2 fare. As we went over the mountain, my partner suggested that we not ride all the way to Mill Valley, but rather exit the bus at the top of the 700 steps and walk down. “Oh, no” said I, dreading a painful descent. As it was, though, the driver dropped us at the top of the Dipsea Steps, saying it was the closest he would get to where our car was. Fortunately, the steps have handrails (and I’d had a night’s rest) which made the descent far less painful that the previous day’s walk down the beach side.

Had I not retired, the experience would have been stressful. As it was, with no office full of patients having to reschedule there appointments, I was relaxed and had a fine time.

On future hikes, even just quick afternoon ones, I will be bringing warmer clothes and a phone charger.