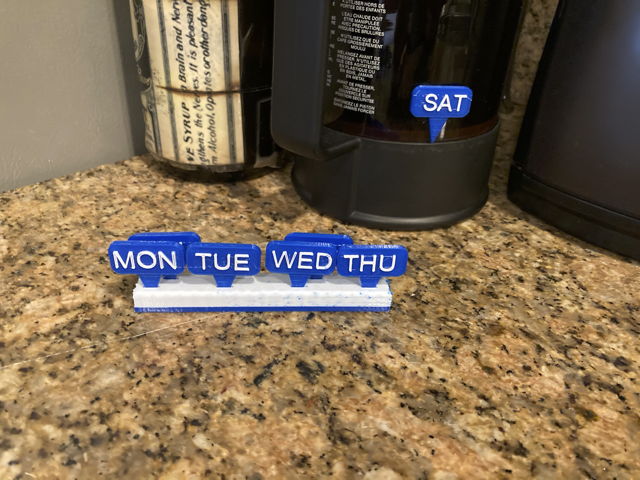 My caffeine daily driver is cold-pressed Peet’s Ethiopian Fancy. It takes 10-24 hours to brew. Things have been so crazy busy in my life, though, that I have a problem. Often, in my sleep-deprived haze, I forget when I put up the last pot. Was that this morning? Or yesterday?

I initially solved the problem by getting a set of day-of-the-week refrigerator magnets. If I started a pot on Sunday, I’d stick the Monday magnet on the press pot. I could use a relatively simple algorithm: if (day-of-week == day on coffee pot magnet) then coffee-ready-to-extract. Even in a sleep-deprived pre-caffeinated state, I did pretty well at not under– or over–extracting my coffee.

Then my carafe broke. 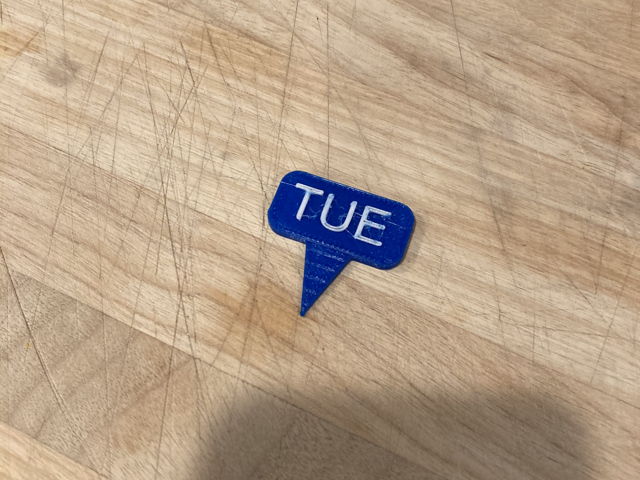 After investigating, it cost only $3 more to buy a replacement coffee pot than to just replace the carafe, so I took that option. When I started my first pot, I realized that the new pot had not a single ferromagnetic surface on it. There was no place to stick my day magnets. I found I could jab a corner under the plastic, but it looked awkward and I ended up with dog-eared corners on my magnets.

The solution, naturally, was to print day-of-week tags with flat spikes on them, which could slide between the plastic and the glass on the coffee pot. I have a dual-extruder printer, so I could just print the day of the week with a different color than the tag itself. I also added a little stand to keep things orderly.

The designs were done in FreeCAD. The source files are in daytags.FCStd and the printer file is daytags.stl.