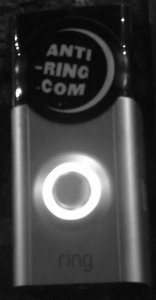 I installed a Ring doorbell camera a couple of years ago, when the product and company were relatively new. I thought it was a fine idea: a way to see who was at your door and even “answer” the door  (through a two-way audio chat) from anywhere.

I was mildly disappointed in the product.

The app took a long time to load, so that I never successfully interacted with someone at the door. Before the app finished loading, people had already given up and walked away. Then, frustratingly, the app would show the captured video as “processing” for a good long while before I could even look at it. If they were up to something nefarious, by the time I could see the video it would likely have been too late to do anything about it. I thought the situation might improve with successive iterations of the app but, no, it just kept getting worse. I suppose if I’d dropped a grand on a new, high-end phone every year it might have helped. That’s a lot to spend just to make my doorbell work, though—and I really prefer less-expensive phones. 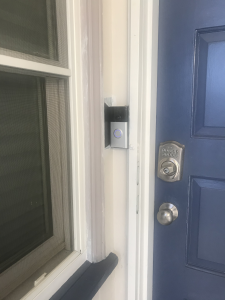 The field of view also didn’t capture the ground in front of the door. Often, my interest was in seeing what parcels (if any) had been left.

I think the biggest surprise, for me, was the Ring’s “social media” functions. By default, the app started showing me all the worst of my “neighbors” in a blatantly fear-mongering way. I quickly disabled those features, but they left a bad taste. As it turns out, I wasn’t overreacting: Ring really was deliberately stoking anxiety.

Ring was selling images from users’ devices to law enforcement, and law enforcement was eating it up, even letting Ring dictate policy in exchange for that juicy non-consensual surveillance data (which subsequently leaked to the public, including images of minor children trick-or-treating on Halloween). 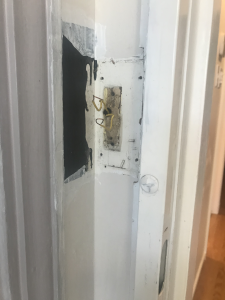 Ring then had some creepy data breaches, where miscreants used Ring devices to terrorize families in their homes. Ring subsequently spewed forth propaganda emails blaming their users for picking poor passwords, though the list of ways that Ring, themselves, failed to mitigate this risk is long and telling.

So, today, I dug up a T-6 Torx screwdriver and ripped out my Ring doorbell. I replaced it with an $5 pushbutton and a $20 camera from Wyze. I won’t have to pay a $30 annual fee for a service that’s marginally too slow to be useful and that disregards my family’s privacy. The WyzeCam can be operated in a completely off-the-cloud mode in case Wyze starts playing fast and loose with data. I can see if there are parcels on my porch, and I won’t have to worry that I’m an unwitting contributor to our already scary enough surveillance state. 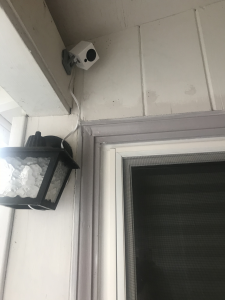