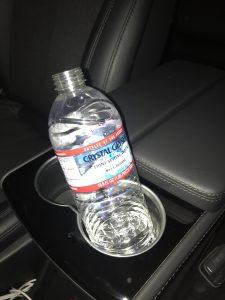 I like bottled water. Yes, I know most of it is just filtered and flavored tap water, but so is Coca Cola. I keep a few bottles of Crystal Geyser in my car and always have an open bottle in the cupholder. I recently got a fresh ride, however, and the cupholders were a bit too generous for the water bottles, which would tilt and spill when I cornered.

It seemed like a trivial fix for a 3-D printer: just print a sleeve with the inside diameter a bit larger than the water bottle, and and outside diameter the size of the cup holder. There are subtleties, though. The cupholders aren’t exactly cylindrical. They taper toward the bottom, and I don’t have the right tools to get an accurate measure of the diameter at the bottom. Next, I want the bottles to slide easily in and out, but I never want the sleeve to slip out of the cupholder unless I am deliberately removing it. 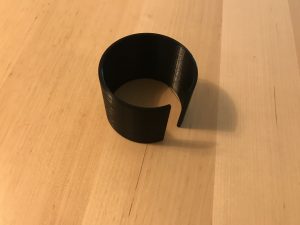 I settled on making the sleeve the same diameter as the top of the cupholder, but putting a gap in it so that it can squeeze together to accommodate the smaller diameter at the bottom. That also gave it good spring force to hold it in place so it wouldn’t get pulled out when I took a sip while driving.

The resulting sleeves fit snugly into the cupholders on my Tesla Model S (2015) and are barely visible. They don’t interfere with the sliding arm rests. They don’t impede the 500ml bottles at all. They don’t pull out even if you aggressively remove the bottle at an angle. Yet they’re easy to remove when you need a larger cup holder.

I custom made them for my Tesla, but they should work pretty well for any car with a cupholder top diameter of around 79mm and a depth of 64mm.

Source (FreeCAD) and .stl (mesh) files are on Thingiverse.