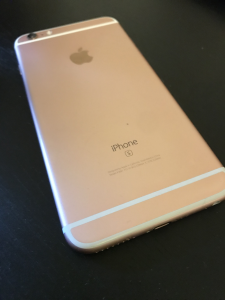 A year or so ago, I was looking for a new phone. I had been using a Google Nexus 6 for two years, ever since I became a beta tester for Project Fi. I loved Project Fi (Google is eversomuch cooler than any other cellular carrier/MVNO in the US), but getting timely updates—even security updates—for the Nexus was like pulling teeth, and they dropped support for what had been their flagship phone barely a year after I bought it. Add to that the fact that there’s no effective private backup solution for Android devices, and I didn’t have any real choice. I had an old iPhone 5 that I had owned for maybe four years, and it was still running the latest version of iOS with all the security updates delivered instantly, while my three-years-newer Android was a security breach waiting to happen.

The latest-and-greatest Apple phones were the iPhone 8 and X. The X was nearly a grand, and the 8 wasn’t a whole lot cheaper. That’s a lot of scratch for a device that I want to carry around in my pocket where it’s at constant risk for loss, theft and damage.

I had the thought that there weren’t any compelling, must-have features in the newest phones. We’re past the point where each new generation of phones brings significant new functionality. I had pretty much decided that I’d be happy with an older-generation phone where I wouldn’t have to be constantly stressed about losing or damaging it, when Woot posted some “scratch and dent” refurbished iPhones on sale. I snapped up a 6s Plus in pink rose gold for $340, moved my Project Fi SIM card into it, and I was set.

I did lose some Fi functionality: I’m now restricted to the T-Mobile network (with a proper Fi phone, you’ll automatically switch to Sprint or US Cellular when their coverage is better), but Tmo coverage is good enough around here. I still have the Nexus, and can schlep it along when I’m traveling to places that otherwise have spotty Tmo service. As a bonus, Google will also give you (yes, give—they even pay shipping) data-only SIM cards so devices can connect for cellular data on your same plan (you only pay for data usage).

I recently upgraded (and downsized) from the 6s Plus to an iPhone 7 (also from Woot) and that went smoothly as well.

My suspicions were confirmed, in that I find that I am much more comfortable using a $300 phone than I ever would be carrying a small, delicate, $1,000 object in my pocket. I’m sure there are people for whom the higher-end features are well worth it, but I just have a bit too much anxiety to take that kind of risk.